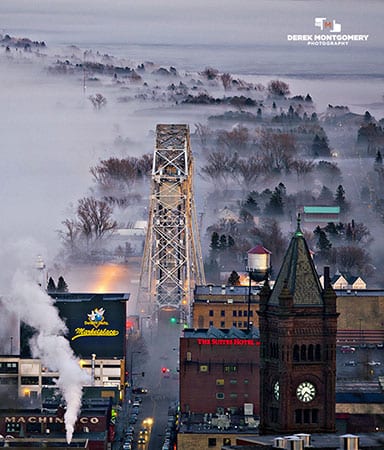 Over the past few days, the Destination Duluth Facebook page posted one of my Duluth images.  It’s a classic scene of the lift bridge shrouded in fog.  This happens just about every day in the Spring and every morning when the temperatures first drop in the winter.  It brings out professional and amateur photographers alike as it’s really hard to say no to such a beautiful scene.

The image took off with over 600 shares and 1,500+ likes at the time of this blog post.  One of the reasons it might be popular is the unique vantage point.  It was shot on the hillside below the Coppertop Church lookout and Sixth Avenue East.  I was standing on a snow pile that was on top of a brush pile on a pretty steep hill.  You have to get into that position to avoid large trees and some buildings.  If you’re not agile or have good balance, it would be a pretty difficult place to get to.

I wanted to address some of the people who suggested I photoshopped the old central clock tower into place.  The only photoshop done on this image was a little sharpening, adjustment for white balance and some contrast and saturation tweaks.  Beyond that, nothing was done to it.  I’m a minimalist with the philosophy that less is more when it comes to using Photoshop on my images.  You can see that in my wedding photos.  No crazy filters.  It also reflects my roots in photography, which is photojournalism where there are extremely strict rules about what you can and can’t do to a picture.  That code of ethics have rubbed off into the other types of photography I do.

I’m shooting the lift bridge at an angle.  While all the avenues  run straight up the hill, Lake Avenue in Canal Park runs at an angle from all the avenues downtown, which allows for this perspective.  The red dot in the image above is the location of the clock tower and the starting point of the line at the top of the page is where I was shooting from.  That’s how you make the clock tower appear west of the lift bridge.  It’s all about perspective and shooting position.