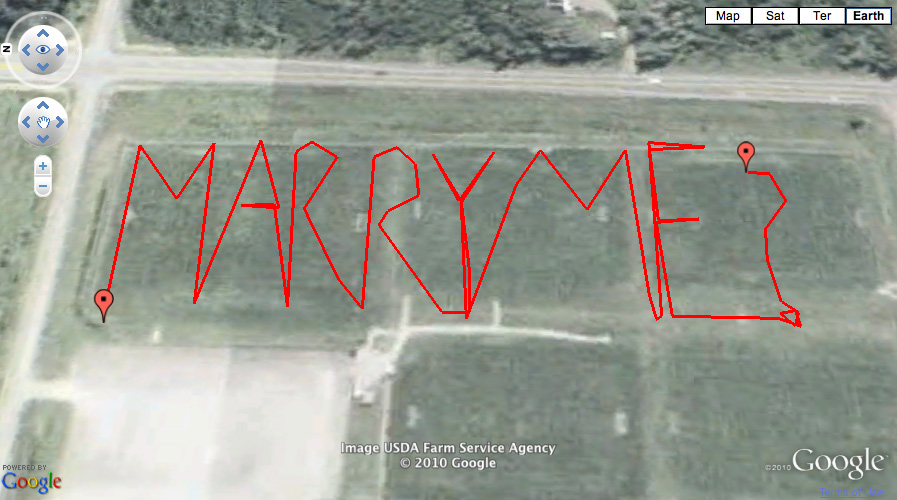 When thinking of ways to propose to my girlfriend of 19 months, the wonderful Kristin Lammi, I came up with all kinds of ideas many of which were bad.  There was the idea that I would find a refrigerator box, pack myself up inside it and wait for her to come home and start inspecting it.  When she started to open it, I would burst out of the box like that lady inside the cake in the first Under Siege.  Too over the top and the chance of having to sit in total darkness inside a box was not sitting well with me.  Then there was the idea that I would go to this scenic overlook in Lester Park near a 50-foot high waterfall, but I thought that was too cliche.  I wanted to try something different.

The idea came to me on a cool Duluth day after I had finished a run.  I was uploading the GPS information from my Garmin Forerunner 405 GPS watch to the Garmin Connect website.  The watch tracks your route, pace and how far you have run.  When uploaded, the path is overlaid on Google Maps.  That day I ran a route that was a little haphazard and I saw what looked like a letter and then hit me!  I could run in the shapes of all kinds of things and it would appear on Google Maps.  Animals, shapes, smiley faces, words, you name it.  I decided I would run out the words M-A-R-R-Y-M-E-? and have the route uploaded to Garmin’s website and then from there I could fashion a way to propose to Kristin.

The first couple of times were a complete disaster.  Think of a five year-old writing with his left hand.  Heck, I’m 28 and can barely write legibly with my left hand.  It did not look good.  So I wrote out a guide on a piece of a paper with specific paths, which would help me create readable letters on the map.  I also needed props at various points where pieces of each letter intersected so I know where I needed to run to and from.  For example, the letter R has a point where a bunch of lines intersect.  The letter Y has a part where the two lines diverge from the center.  You know what I mean.

So with my guide, an orange hunting cap and four towels, I set out to find a large open field.  This wasn’t easy.  The first few places I looked at were private land.  The second spot was a swath of forest that was clear cut to make way for giant transmission lines.  Not wide enough.  I turned to Google Maps and searched the area around where I live until I found the Lake Park soccer fields in Lakewood Township.  I was still unconvinced.  I wasn’t sure if something as wide as two soccer fields would even show up when I start turning and running back and forth and all over the place to form the letters.  I decided to give it a shot and it worked, but I needed to do it a few more times and get it perfect.

Just before noon today, I set out with plenty of props to mark my path.  It went a lot smoother than the first few times and this time was readable.  There was a maintenance man at the soccer field giving me weird looks as I ran in circles and triangles and all kinds of weird paths all the while looking at the paper guide in my hands.  I was pretty happy with the result and wasted no time in asking Kristin to marry me as soon as we were back home for the night. I said something to the effect that she should check out the path I ran tonight because something crazy appeared on the GPS after I uploaded the data.

She said yes, it was awesome and I couldn’t be happier!  For those of you wondering about how far I ran to spell out the words, it was 1.06 miles.  All together, I ran about 15 miles in various test runs to get this to work.  I also burned approximately 1,250 calories in the process.  In the end, I chose the soccer fields because it was a wide open publicly accessible place and it didn’t hurt that my girlfriend is a soccer coach.

Below is the route and the words as they appeared when the GPS information was uploaded to Google and below the map was the guide I used to make the magic happen.